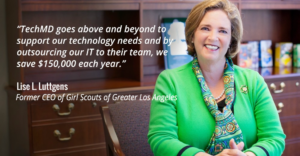 The Girl Scouts of the USA have been empowering young women for over 100 years, through team-building, skill-development, and community service projects. The Greater Los Angeles council formed after six LA-area councils merged and appointed Lise L. Luttgens as their first CEO in 2008. From 2008 to 2019, she spent her time living and breathing the Girl Scout message and helped serve over 40,000 Girl Scouts in the greater Los Angeles community. She has been nominated for CEO of the Year and has a master’s degree in public health from Yale University’s School of Medicine.

“In 2008, as our six Girl Scout councils merged into one large organization, we knew we needed a different approach to IT. TechMD partnered with us to design and support a seamless IT infrastructure that has positioned us for growth into the next decade. TechMD goes above and beyond to support our technology needs and by outsourcing our IT to their team, we save $150,000 each year.”

We value great communication, bright minds and having fun.